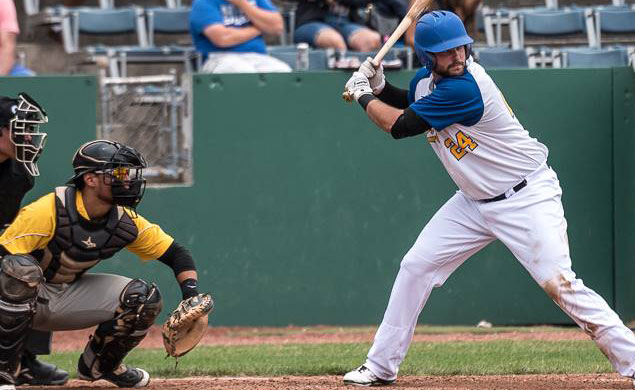 The Old Orchard Beach Surge picked up their second win of the season, defeating the Sullivan Explorers with a final score of 11-5.

The Old Orchard Beach Surge (2-1) defeated the visiting Sullivan Explorers (1-2) on a rainy afternoon at The Ballpark in Old Orchard Beach.  The Surge offense rallied in the 8th, scoring 7 unanswered runs for an 11-5 victory.

Nate Briseno and Gevon Jackson each picked up an RBI in the 4th, giving the Explorers a 4-2 lead.

Right handed pitcher David Ernst took over the mound for the Surge in the 5th, ending the day for starter Emil Flaquer.  Flaquer walked 6, struck out 2 and allowed 6 hits.

The Surge got within 1 run in the 5th, with Nathan Schwertner picking up an RBI walk.  The Explorers added to their lead in the 7th, with Maine native Nick Grady knocking an RBI triple.  Surge third baseman Luc Pomales would add an RBI double in the 7th, bringing the Surge within 1-run.

The Surge offense came alive in the 8th inning, sparking a 7-run rally.  Outfielder Jacob Fabry started things off with a 2-RBI single. Two passed balls would allow Fabry to reach 3rd, he scored off a Jordyn Van Atta sac. Dan Gagnon and Joshua Martinez would each single, knocking in 3 more Surge runners.  Fabry would pick up another RBI, as the Surge batted though the lineup, knocking in the 7th run of the inning.

Martinez would transition from the infield to the mound, taking over for Ernst to close out the game.  Ernst picked up his first win of the season, allowing just 3 hits over 4 innings of play.  Martinez allowed 0 hits while striking out 1.

The Surge return to action tomorrow night, June 6th, at 6:30pm for game four of their five-game series with the Explorers.  Tomorrow night, we will be celebrating National Yo-Yo Day at The Ballpark, with the first 50 guests receiving a yo-yo!