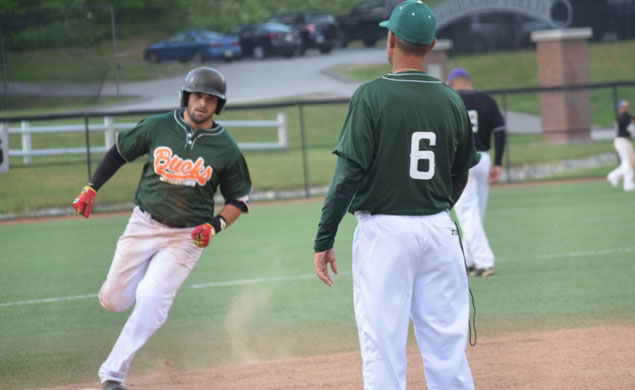 The Watertown Bucks (1-0) got their first win of the season tonight in a high scoring battle with the New Hampshire Wild (0-1). The Game started off with a Grand Slam by Wild 3rd Baseman Joshua Wong off of Starter Jimmie Davis that put the Wild up by 4. But that was just the beginning of a long offensive game.

Both Starters Jimmie Davis and Trevor Jaunich went 5.0 innings pitched and both got no decisions. David Hatt earned the win for the Bucks and Matthew Petersen got the loss. The Bucks took the lead in the 5th inning 8-7 before both managers made moves to the bullpen. The Wild took a 9-8 lead in the 7th when Wild catcher Ken Matzusaka blooped a go ahead double.

The Bucks were not finished however, the team rallied with two outs in the 8th inning to score a 3 runs and regain the lead and keep the lead going into the ninth when closer Matthew Eschelman took the Wild in order to take the first victory of the season for the Bucks.

Elliot Armstrong led the offense for the Bucks with 3 singles, 1 double and a stolen base, while Joshua Wong led the Wild with a Grand Slam and 4 RBI’s and Justin Black also homered with 3 RBI’s.

“We made a few too many mistakes. Bucks hit the ball really well though. I feel like if we could’ve made a few routine plays at the beginning of an inning or with 2 outs that it could’ve changed the outcome of the game even with all the hitting that went on but tonight we didn’t make those plays and it got us.” NH Wild Manager Jerry Gonzalez

Manager of the Wild Jerry Gonzalez wasn’t happy about the 4 errors his team made to the Bucks 0. He believes that was the biggest difference in the game.

The Bucks will take on the Wild again tomorrow night (Saturday) at 6:30pm at Dr. Arthur and Martha Pappas field. Tickets are just $5.