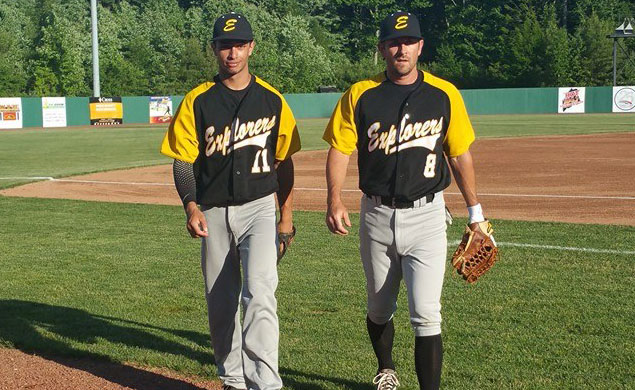 Your Sullivan Explorers (2-2) defeated the Old Orchard Beach Surge (2-2) in extra innings on Monday night at The Ballpark in Old Orchard Beach with a final score of 12-10.
The Explorers took a 2-0 lead in the 1st off a 2-run homerun from shortstop Nate Coronado. Surge outfielder Sean Washington would cut that lead in half with a solo shot, his first of the season.
The Explorers took a 5-1 lead in the 2nd, with left fielder Bryan Hoover knocking in a 2-RBI single. The Surge would pick away at the lead, with shortstop Dan Gagnon knocking an RBI single. The Explorers collected 2 more runs in the 3rd, with a walk and a wild pitch allowing runners to score, making it 7-2.
Right handed pitcher Christian Telemaco would take over for the Surge in the 4th, ending the night for starter Benny Collesano. Collesano ended his debut with 3 walks, 3 Ks, and 4 hits.

Sullivan took an 8-2 lead in the 4th inning, with first baseman Brian Fay and left fielder Bryan Hoover picking up RBI’s on walks. The Surge began to rally back, cutting the lead in half off a 2-run single from Washington. Fay would add an RBI single in the 6th to make it 9-4.

The Surge offense came alive in the 6th, coming within 1-run of the Explorers. Van Atta picked up an RBI and third baseman Luc Pomales knocked in a run on a sac fly.

Explorers outfielder Gevon Jackson made it 10-8 with an RBI single in the 7th. Relief pitcher Rich Baerga would take over the mound for the Surge.

DH Kevin Putkonen got his 4th double of the season. The Surge would rally back to tie the game 10-10 in the 8th inning. Outfielder Brandon Cooksey and Gagnon each knocked RBI singles.

The game remained tied until the 10th inning when with 2 outs Explorer’s second baseman Hayoto Shigeta knocked an RBI double scoring Bryan Hoover who reach with a single up the middle. Gevon Jackson would add an RBI single to make it 12-10 in for the Explorers.

The Sullivan Explorers face the Surge for their 5-game series finale tomorrow night at 6:30pm at The Ballpark in Old Orchard Beach.
The Explorers will be home on June 8th for a 3pm start at Generals Park!