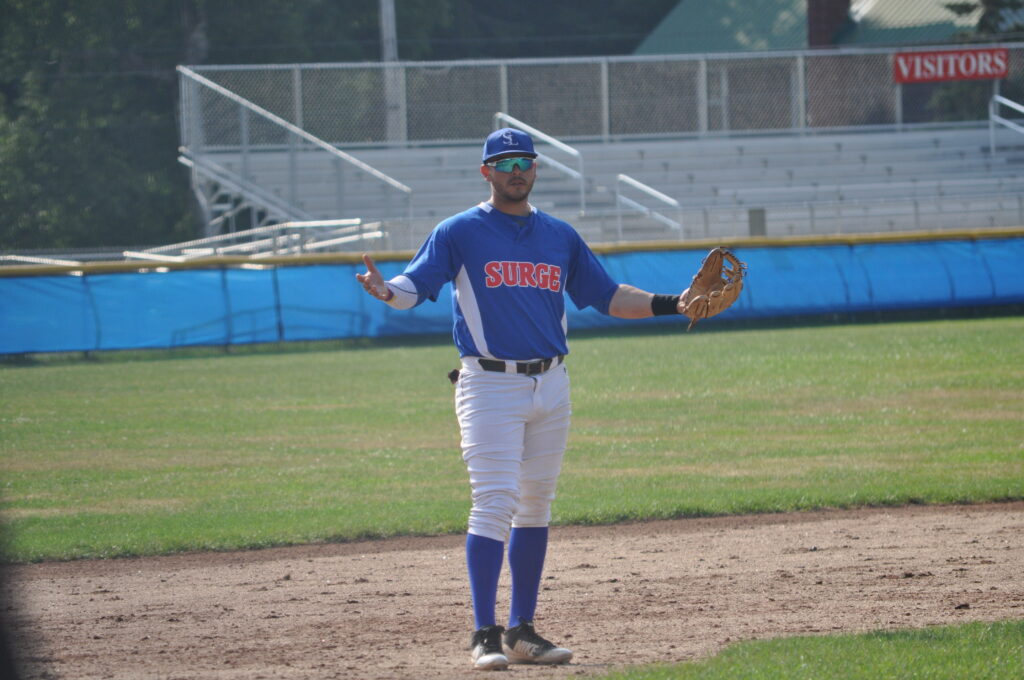 On Tuesday, June 29th, the first place Tupper Lake Riverpigs visited Saranac Lake to take on their cross-town rival
Surge in their second series matchup of the regular season.

This series serves as the concluding set of a home-stand for the Surge after a 2-1 series win against the Plattsburgh
Thunderbirds. On the other hand, Tupper Lake split games, 2-2, with the New Hampshire Wild prior to traveling to
Saranac. With both teams securing two wins in their previous series’, two more wins, in this series, will clinch a
victory for either squad.

Tupper Lake opened the first game of the series with four runs in the first inning, solidifying the hopeful strong start
they desired. Unable to find a groove in their bats early, the Surge would trail 5-0 until a three run third inning helped
limit the Riverpigs lead.

Riverpigs pitcher Conor Maguire would go on to throw three scoreless innings, in which time the Tupper Lake offense
would tally on four more runs to take a 9-3 lead. Heading into the bottom of the seventh, Tupper Lake’s defense
allowed several runners to reach base safely and, ultimately, score two runs of their own. Maguire would exit the
game mid seventh inning; his outing consisted of eight hits, five earned runs, and three strikeouts. Another couple
runs scored by Tupper, in the late innings, provided the squad with a dominating 11-5 game one victory.
Outfielder Edward Salcedo was the player of the game, highlighted by his two ding pieces and three RBIs. He leads
the Empire League with six home runs thus far in the season.

After a dominating performance by Tupper Lake in game one, game two would prove to be critical to the Surge as
they risked dropping two straight.

Starting pitcher for the Surge, Joey Lara, allowed only a single run in the third inning, and would go six innings of
work, spotlighted by an impressive eight K’s and five shutout innings.
Offensively, a five run bottom third for the Surge gave a 5-1 cushion throughout the game. The pitching for both
teams were fantastic towards the end of the match, throwing a multitude of scoreless innings. Due to Saucedo’s
dominant game one, the Surge made the decision to intentionally walk the big fella a couple of times to try and limit
runs, and it worked.

Even though the Riverpigs would make a late game charge in the eighth inning, scoring three runs, they would fall
short of a win and lose 6-4 in game two.

Heading into game three, with the series split at one game per, a final match win for either troop would secure a
clinched set. Currently under the losing half of the bracket, a game three victory for Saranac Lake would be huge for
their overall confidence down the stretch. Another series victory for Tupper, with an overall standing of 10-6, could be
major, as they are in a tight race for first place with the New Hampshire Wild (9-5).
Game three was one where fans were reared and ready for the home team Surge to, hopefully, take home yet
another series win. Just a few wins off of Tupper’s first place lead in the standings, opportunity came knocking at
Saranac’s door when they desired it most.
Early in the game, the Riverpigs would score four runs, followed by a Surge blast by Brandon Gutzler to shrink the
Tupper lead to a minimal three runs.

Following three scoreless innings from the Tupper Lake offense, the Surge would continue to make life difficult for the
opposing squad as three more runs would be tallied on to the home team’s score, tying the ball game heading into
the top half of the seventh. In the seventh, the Riverpigs would rally to score another run and take the lead.
With the Surge trailing by a run and the series finale coming to a near close, Saranac Lake and its fans hoped for
something special to be granted to their home team. After a questionable call at home plate to, ultimately, tie the
game, the Surge were fired up and ready to take redemption. Former New York Yankees prospect, Edel Luaces,
came up to the plate determined to spark some excitement at Petrova Field. Leading the league in batting average,
Edel Luaces stretched his average by blasting a moon ball to deep center field to take a 6-5 lead. May I also add; that
ball still has yet to land. Even though the 4th of July is in the near future, fans and those watching the game were
given an early fireworks extravaganza. In a post game interview with Luaces regarding his two run home run, he said
“I was just trying to get the tying run home at the least.” He would, obviously, outreach his expectations.

The clutch hitting from the experienced outfielder would end up securing the Surge with the win to complete and
clinch a 2-1 set victory over the first place Tupper Lake Riverpigs.

Brandon Gutzler, the player of the series, had an exceptional seven hits in three games to extend his streak of at
least one hit in a game. Guzzler attributes his recent hitting streak back to his JUCO days, saying, “I read my reviews
from the past and had a piece of paper which included how I should approach the ball and I applied that to this series.
I really just wanted to simplify things instead of thinking so much.”

Both Luaces and Guzzler have high hopes for their team; they both think they have something to prove and that the
talent on the squad is, in their opinion, unmatched.
The Saranac Lake Surge are now just a mere 2.5 games off of the lead