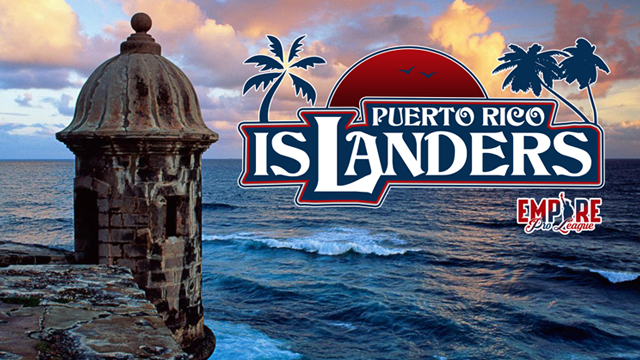 “Expansion and growth are the key words being used in the Empire League. We want to continue improving as a league, and as the top opportunity provider for players entering the Professional baseball ranks at the independent level” –  CEO Eddie Gonzalez.

We want to continue feeding players at a high pace to the Independent Professional Baseball Federation leagues like the Atlantic League, American Association, CanAm, and Frontier League, as well as keeping rookies ready for affiliated opportunities.  Today we introduce Puerto Rico as a new Franchise to play in the Empire League beginning in 2017 Season.
The Goal, is to  establish a competitive franchise that would play their home games in Puerto Rico, and all teams would travel every year to play as visitors in Puerto Rico.  But until all negotiations are finalized and the city of the franchise is determined, with how different city operations are this could take over a year. In the mean time, the Puerto Rico franchise would still participate and play all of their games on the road until a representative city is finalized.
Baseball Director Eddie Gonzalez is a Puerto Rico Native, and He wants to continue opening doors as he has been opening for players internationally and in America to the Puerto Rico American prospects as well.
We will be holding tryout camps in Puerto Rico and in the US, as the methods of recruitment to finalize what will be know as the Puerto Rico roster.