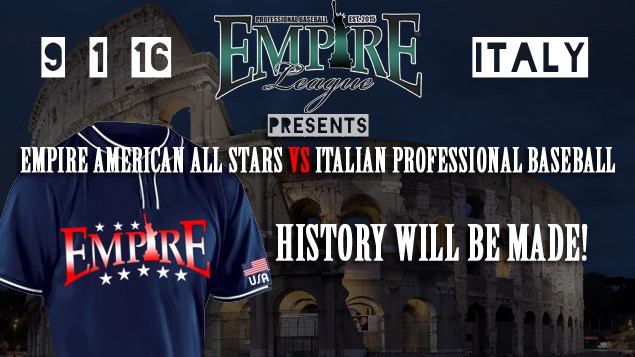 Thats correct. The Empire League has teamed up with Italian Baseball and will be having exhibition games in which the Empire League Selected players will take on Italian Professional Baseball teams during a 14 day tour of Italy.

The Empire American team will travel to Italy on September 1 and will have 5-7 exhibition games scheduled all around Italy including Rome.

“Im super excited.  This is a one in a lifetime opportunity for these guys and will be my first time traveling to Italia and what better way to go then to play professional baseball. This is a dream come true and with what the league has in works in Italy, things are going to get exciting in the next year or so. We have a great group of guys going and this will be something we will never forget”  New Hampshire Wild Manager Jerry Gonzalez

The team is to be finalized by August 15th. With most players committed, there are only a few more spots that will be filled before departing to make history in Italy.