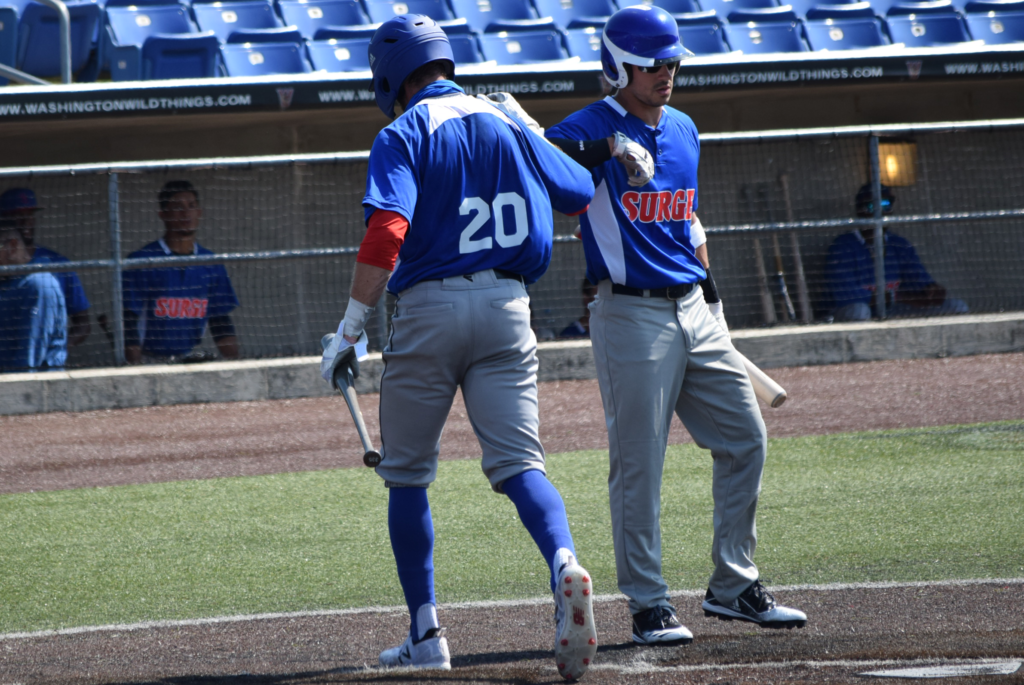 WASHINGTON, PA – Rivals took the field in the 3rd battle of the Adirondacks in the Empire League Series.

Tupper Lake Riverpigs would take on the Saranac Lake Surge in the 11:00am matchup which featured Riverpigs Stephen Cardiello facing off against the Surge starter and Empire League Series strikeout leader Carlos Canelon.

The Surge would get things going in the first inning when Eddie Suri drove in Cory Alexander for the first run of the game.

In the 2nd inning the Surge would put up 4 more as Eddie Suri once again singled in a run followed by a 2 run single by first baseman Sid Kumar to make the game 7-0.

Riverpigs got themselves going in the bottom of the second when Steven Rodriguez would ground into a fielders choice to score the first un. Following him was Brandon Camargo who singled up the middle to drive in Josh Goulet for the 2nd run of the inning.

Blinger Perez would come in to pitch for the Riverpigs in the third inning and immediately getting out of a jam as the first batter would ground into a double play.

The Surge would continue their offensive attack as the scored another run in the top of the fourth inning when John Tierney singled in the right center gap to score Alexis Monge.

Riverpigs would continue to chip away as Steven Rodriguez doubled to put runners on second and third for Brandon Camargo who doubled off the right field wall to bring in two runs and bring the score to 10-4.

Surge would answer right back when second baseman Alexis Monge doubled with bases loaded to score two runs. Following him was John Tierney Jr with a double down the right field line to score another two runs. Tierney would score on a single up the middle by Taylor Olmstead and the Surge would take a 15-4 lead.

Carlos Canelon would get the first Surge win going 5 complete innings striking out 9 batters and earning the victory.

The Surge would go on to defeat the Riverpigs in the 3rd match of the Adirondacks. Riverpigs still lead the series 2-1.

Both Teams will continue play tomorrow when the Tupper Lake Riverpigs take on the Road Warrior Black Sox at 11:00am and the Brilliance Sox take on the Saranac Lake Surge at 3:00pm