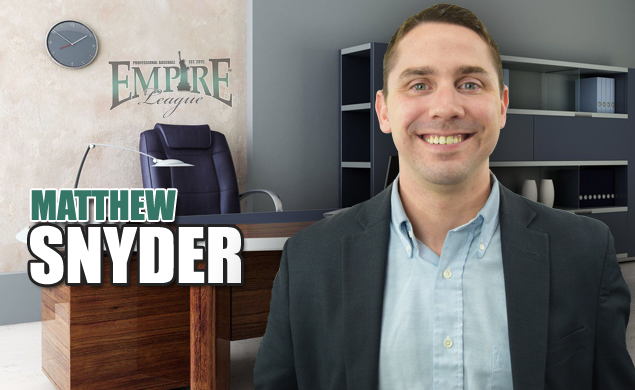 Matthew Snyder joins the Empire Professional Baseball League for his first season as League Director of Business Administration.  Most recently, Snyder served as a Corporate Partnerships Account Executive with the Camden Riversharks of the Atlantic League.  He also served as the Director of Business Operations with the Austin Bruins of the NAHL.  A graduate of Stetson University College of Law, Snyder worked as the Contract Administration Manager with the SEIU-FPSU, where he was responsible for contract negotiations, administration as well as grievance and arbitration representation.  Snyder brings with him extensive experience with the Atlantic City Boardwalk Bullies of the ECHL, Tampa Bay Rays, Tampa Bay Lightning and San Antonio Rampage (An affiliate of the Florida Panthers) organizations.  Snyder began his career with the Atlantic City Surf, also of the Atlantic League.

“I am extremely excited to join the Empire Professional Baseball League. The opportunity to help players develop and grow is very rewarding. In addition, bringing family friendly entertainment to the guests in each of our markets is an exciting proposition.
I am honored to be working along side The Empire League officials including Director of Baseball and Business Operations Eddie Gonzalez and I look forward to developing the league’s success.”

As Director of Administration, Snyder will be responsible for oversight of all activities related to the day to day function of the Empire Professional Baseball League.
Article by Empire League Media