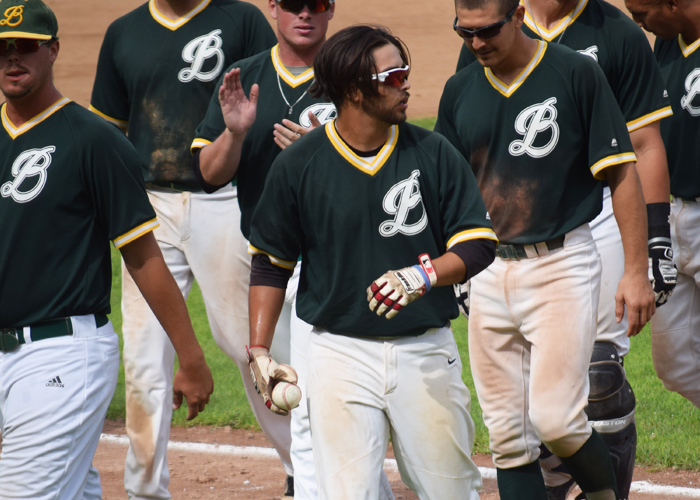 PLATTSBURGH, NY –  The Empire League playoffs have been something to watch these past couple days as Josh Martinez completes the third walk off of the payoffs in the 3 games played to defeat the Puerto Rico Islanders 3 to 2 in the bottom of the 9th.

The New York Bucks took the 1 – 0 lead when Tyler Post hit a solo homer off Islanders knuckleballer Ryo Sanogawa in the bottom of the 4th inning. The Bucks would tack on another one  when Franklin Jennings tripled to the right center gap and would the score on a single by Catcher Dalton Hughes.

Phil Reese tossed a phenomenal game going  8 complete innings giving up 5 hits, 1 earned run, walking only 2 batters and striking out 7 Islanders. He would give up his first run of the game in the 8th inning when Angel Perez doubled to start off the inning and would score on a base hit by  Nick Landell.

In the 9th inning he would come out of the game after walking the second batter of the inning.  The Puerto Rico Islanders would make a move pinch running Cole Easley for Catcher Yordany Salva who walked. Easley stole second base and advanced to third base when throw to second ended up in center field. The Bucks closer would then give up a single one a 3-2 count to Islanders outfielder Kyle Schade to tie the ball game at 2.

Ryo Sanogawa would take the mound still for the 9th inning and walked the first batter. He was then replaced by Jordan Matos. The runner, Kenny Collins, would steal second base to put himself in scoring position. Islanders decided to intentionally walk the next batter for a potential double play. However Josh Martinez had other plans as he smoked a ball over the left fielder Ryan Riveras head to score the winning run in walk off fashion.

Game time tomorrow is at 12:00pm at Chip Cummings Field.