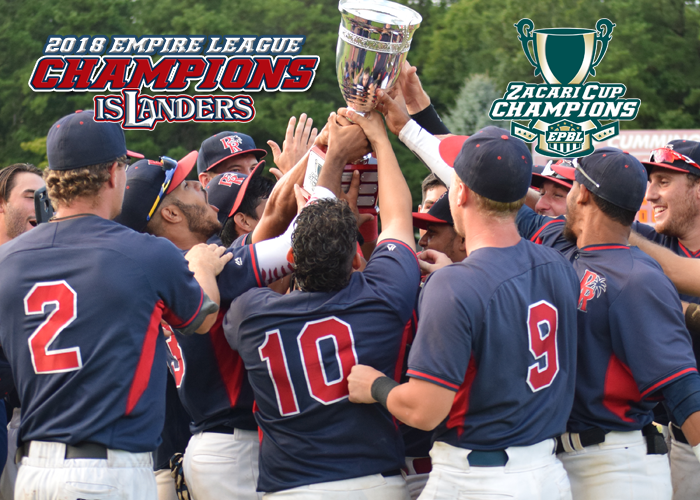 PLATTSBURGH, NY – The Puerto Rico Islanders have defeated the New York Bucks in the final two games of the series to become the 2018 Empire League Champions.

After falling behind in the series (1-0), The Islanders sent  right hander Kurtis Hultz to the mound to face off against Tanner Klein. Kurtis tossed 5.2 solid innings getting out of several jams after allowing 8 total walks and 2 total hits.. He strike out 2 batters and allow 2 earned runs.

It was another nail biter as the Islanders were up 3-2 in the 9th inning when the Bucks outfielder Trey Hannam hit a double off the wall with a runner on first base to score him and tie the game.

In the bottom of the inning the Islanders would have a runner reach first and would steal second on the very next pitch. With two outs there was a ground ball to the Bucks second baseman in which he made a good throw to first base but the first baseman could not handle it and ball ended up getting passed him allowing the runner to score from second base and a walk-off win for the Islanders.

The Walk off was the 4th straight walk off of the best playoffs in EPBL history to push it the 3rd and final game to be played right after.

In Game 3, The Islander took an early lead and never looked back.  Manager Tony Rodriguez sent pitcher Axel Cruz to the mound and was  solid going over 5 innings pitched  striking out over 5 batters. Cruz, who is normally a reliever was the last available pitcher for the Islanders.

The Islanders exploded in the 5th inning tied at 1 with a 5 run inning. Bucks starter and relief pitchers walked several of the Islanders and a couple of mistakes turned into a big inning for the Islanders

The Islanders never looked back as they would go on to defeat the New York Bucks 7-2 and take the 2018 Empire League Championship.