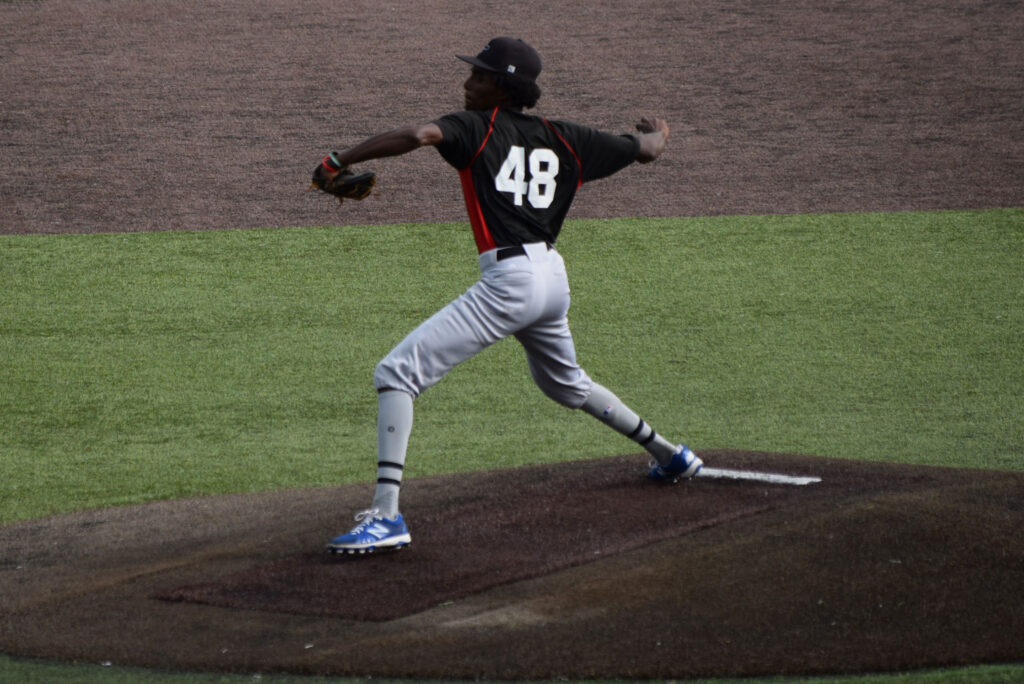 WASHINGTON, PA – The second matchup of the day was between the Brilliance Sox and the Tupper Lake Riverpigs.

Starters for this one was Stephen Cardiello for the Riverpigs and the Brilliance Sox will bring left hander Cole Bumbales.

Top of the 1st inning Cody Lovejoy led off with a double off the left center wall. He would end up scoring on a sacrifice fly to right field by Ben Andrews to give the Sox a 1-0 lead.

The Riverpigs answered immediately when Marcus Guzman walked to lead it off, Steven Rodriguez would double to make it runners on 2nd and 3rd with no one out. Nicholas Ybarra also doubled to deep left center to score Guzman and Rodriguez. Aramis Cruz joined the doubles party with one of his own scoring Nicholas Ybarra. Cruz would end up scoring on a sacrifice fly to right field by Josh Goulet to make it a 4-1 game.

Sox answered in the Top of the 2nd inning with a run to cut the lead in half.

Riverpigs would continue their offensive production led by first batter of the inning in the bottom of the 4th in Brandon Camargo who singled to left. With bases loaded, Marcus Guzman would walk in the first run of the inning. Steven Rodriguez would ground into a fielders choice in which a throwing error caused another run to score. Nicholas Ybarra continues his impressive streak of hitting with another single to the right side to score Guzman and Rodriguez for the 4th runs of the inning and a 8-2 Riverpigs lead.

After the Sox scored one in the top of the 5th inning, the Riverpigs answered with one of their own with a double by Marcus Guzman to score Tyler Bailey and take a 9-3 lead.

Lot of offense in this game as Tyler Reis lead off the top of the 6th inning with a monstrous homer over the left field wall to make it 9-4. 2 runs would come in on a 2 out clutch triple by Trey Bigford to make it 9-6.

After a series of walks by the Riverpigs bullpen, Cody Lovejoy singles up the middle with 2 outs to score 2 runners and take a 10-9 comeback lead and the victory.

Both Teams will continue play tomorrow at 11:00 am ET and 3:00 pm ET for more Empire League Series action.