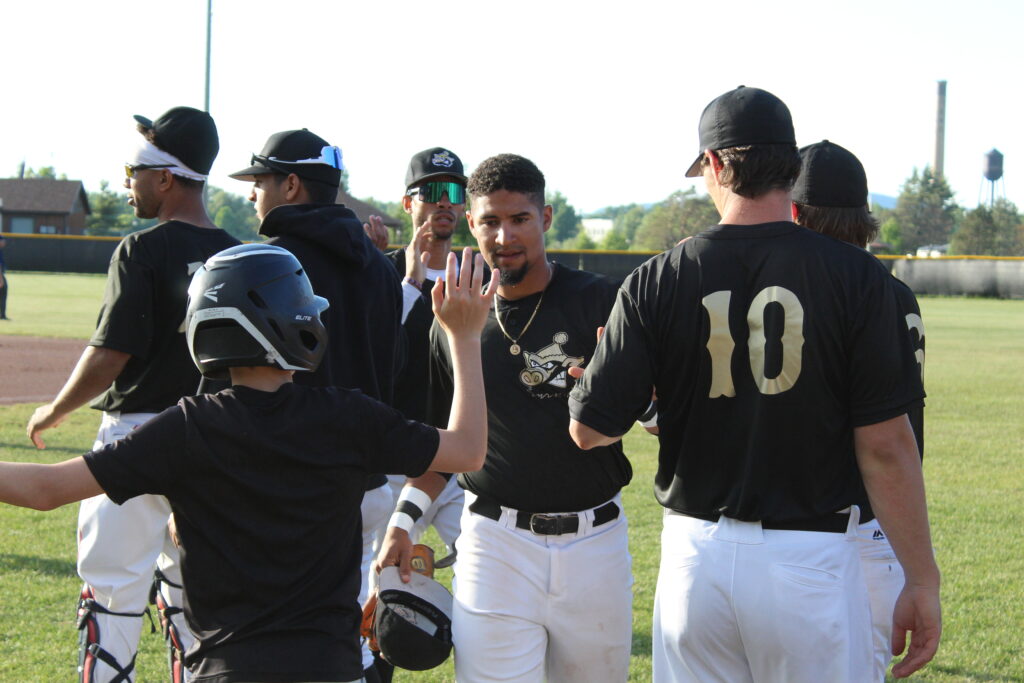 TUPPER LAKE, NY  –  After taking two games from the Japan Islanders in the first series of the season, the Tupper Lake River Pigs took three out of four games from their rival, the Saranac Lake Surge.

The first game of the series came down to the wire as the Surge brought the score within one at 8-7 in the top of the eighth inning. However, they were unable to get any momentum going against River Pigs closer Randy Alcantara, who shut the door striking out one batter in the process.

The River Pigs were led offensively by Khalyd Cox, who went 3-4 with an RBI and a run scored, and Mikey Edie who went 2-5 with two runs scored and two RBIs.

On the pitching side, Jared Dingus led the way with a strong start, going 4.1 innings, allowing only one earned run, and striking out two batters. He was followed by Zach Goree who put in a strong 0.2 inning outing, striking out both batters he faced. Jorge Hurtado however had a hard time getting outs in the final two innings allowing three runs and allowing the Surge to comeback and make the game close.

On the Surge side, Christian Naccari got on base in all five of his at-bats, going 3-3 with two singles, a double and two walks. Yordi Francisco followed up Naccari’s performance with a 1-4 day cashing in two RBIs.

The starter for the Surge, Jay Palais, gave the Surge the length they needed in order to preserve their depleted bullpen. Palais went 6.0 innings, and struck out five batters, he allowed eleven hits and five earned runs, but his defense was not his best friend during the game, committing four errors.

Game two of the series was a different story, towards the end of the game, the Surge pulled away to complete their first win of the season, 11-5. This game was Christian Naccari’s final game with the Surge as he went 4-6 with a double, a home run and five RBIs. After this game, Naccari was called up to the Empire State Greys.

The Surge got another lengthy start from their starter, Jessel Soto, who, like Palais, went 6.0 innings. However, Soto only allowed four runs, and was able to strikeout seven River Pigs batters.

On the River Pigs side, their offense was led by Mikey Edie, who went 3-4 with three RBIs, yet another game in which he dominated to help keep the River Pigs alive. However, their pitching let them down in this game. Jose Mieses, Joseph Brennan, Austin Henson and Jose Zacharias were all unable to put out the hot Surge offense.

Just like the first game, the third game of the series ended in a close one run 6-5 River Pigs victory. The River Pigs were led by a fantastic start by Daniel Rojas, who went six innings, allowed only three hits and struck out four batters. Jorge Hurtado came in to relieve Rojas and failed to get an out as he allowed two runs on three walks. Fortunately, Zach Goree came in and threw two strong innings, striking out five batters.

In his first game, Randy Alcantara had a very strong outing. In this outing however, he almost handed the Surge their second straight win. But, he was able to win the game for the River Pigs, allowing three runs and striking out two batters.

Walner Espinal provided the spark for the River Pigs offense going 3-4 with an RBI and three runs scored. All three of his hits were singles, but he was able to score off of each of them, helping to pad the River Pigs lead.

The Surge’s starter, Cairo Selden, was mostly ineffective and had a hard time throwing strikes against the River Pigs offense. Selden was able to pitch 4.1 innings, but he walked eight batters, gave up two hits and three earned runs. Shawn McFeggan entered for Selden and put in a smooth 1.2 inning outing. Mark Berryman, the pitcher who entered for McFeggan surrendered two earned runs to the River Pigs, giving them the lead for good.

The starting pitching for Saranac did not look much better in the final game of the series. In the game that would decide either a series split or a Tupper Lake series win, the Surge sent Ryan Evans to the mound. In his outing, Evans went 4.0 innings, he gave up nine hits, nine runs, two walks, while only striking out three batters. Jordan Rhodes, who relieved Evans, did not get help from his defense as he allowed four runs to score, but only one was earned. Steven Adamson entered after Rhodes to finish off the final two innings and was much better than the two before him, allowing two hits, a walk and one unearned run.

Yordi Francisco led Saranac in the offensive category, going 2-4 in the game. He hit a single and double with two RBIs. Nine hole hitter Dominiq Moore went 1-4 with a solo home run.

For the River Pigs, Brandon Camargo had a big game, knocking in four RBIs and going 1-3. Walner Espinal, Hector Martinez and Chandler Kazele each had two RBIs en route to the Tupper Lake victory.

Starter and two way player, Jose Zacarias, did not have his best stuff on the mound, going 4.1 innings, allowing all six of the Saranac runs to score. He also allowed nine hits and struck out four batters.

The River Pigs welcome the Plattsburgh Thunderbirds to Tupper Lake for the first time this season also marking the first matchup between the top two teams in the EBL. The first game of the series is set to take place on Thursday at 7:00 p.m. at Municipal Park. The Surge are set to face the Japan Islanders in Lyon Mountain for the first game of a scheduled four game set at 4:00 p.m. on Thursday.