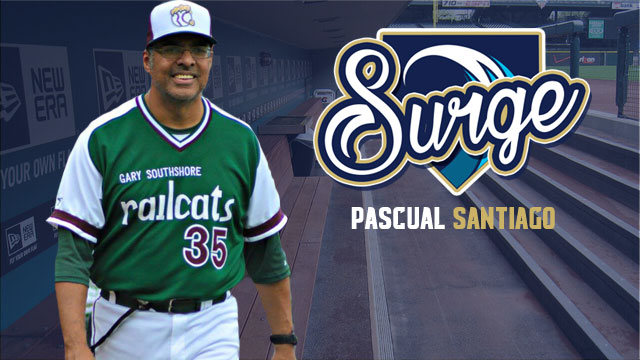 OLD ORCHARD BEACH, ME – The Empire League announces the signing of new Old Orchard Beach Surge Manager Pascual Santiago.  Pascual has chosen to step down from his great position with the Railcats to be a Manager in the Empire League.

Pascual  previously worked with the Gary Southshore RailCats of the American Association for three seasons from 2011-2013.  He was on the staff for the RailCats’ 2013 American Association Championship.  Santiago was the pitching coach for the Joliet Slammers of the Frontier League.  His other coaching experience includes time as the pitching coach of Dominican University and serving as the bench coach of the Windy City ThunderBolts, also of the Frontier League. He has also coached college baseball at Robert Morris and Lewis University. Santiago is also the head coach of the Olive Harvey City College Panthers.  Olive Harvey is a community college on the south side of Chicago.

“I appreciate the opportunity to manage a team in the Empire league and I thank Eddie Gonzalez and his partners for that opportunity.” – Pascual Santiago

He bring a wealth of knowledge through his experience and a strong network to help players advance in levels. With that being the primary focus of the Empire League, he becomes a great fit for an Empire League organization.

“Bringing a high level baseball guy,  with his qualities and attitude meets one of our main goals of making sure that our managers are well qualified and capable of promoting players. We are happy to have Pascual as a member of the Surge stepping down from a high level league which is what everyone dreams of to come help these younger guys. That says a lot about his committment and goals.” – Eddie Gonzalez