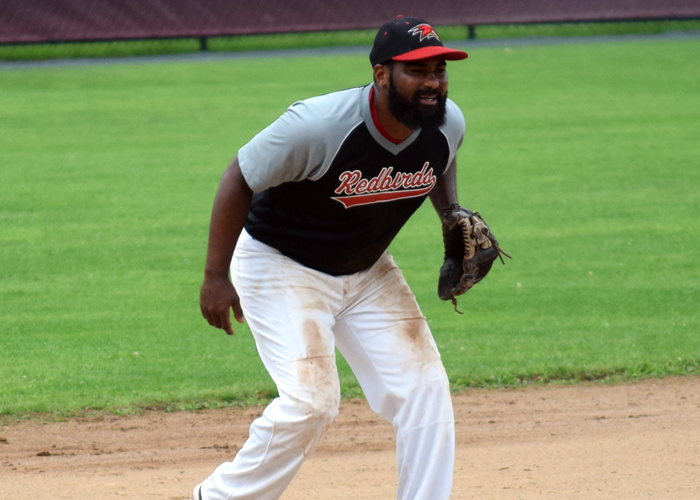 PLATTSBURGH, NY – The day after the RedBirds clinched the EPBL Playoffs, Brandon Young was given an opportunity to play all nine positions.

Talk about being a utility player. Young started the game playing second base where he got an assist. He then moved to shortstop  where he had another assist in the second inning. He was moved to third base in the third and the ball seemed to be finding him everywhere he was positioned. This time however, he would end the inning with one error.  In the 4th inning, Young started the inning playing first base and fielded an unassisted ground ball to end the  inning.

Young was then put in center field in the 5th where he fielded a single with no other plays being made his way. In the 6th inning, he made the final out by catching a shallow pop fly for an out as the left fielder.

The 7th inning was interesting.  Young started the inning as the catcher. He saw one batter before the manager pulled the starting pitcher out of the game. During the break, Young was replaced behind the dish and moved to right field where he would also see some action fielding a pop fly.

In the 8th inning, Young came in to pitch in relief with 2 outs. He would give up 1 hit and walk 2 batters before getting the final ground out to end the inning and complete playing all nine positions.

I had a lot of fun today, when coach told me i would be able to do this i think the whole team was excited to see it happen. – Brandon Young

The game ended with a 8-4 loss  for the RedBirds but it was surely an interesting game to watch as the game itself had no meaning in the playoff picture.

The Playoffs will begin on Friday night at 11 am and 4 pm in Chip Cummings field. Fans can pay for one game and watch both playoff games. The 11 am game will feature the Puerto Rico Islanders versus the New Hampshire Wild while the 4 pm game will feature the Plattsburgh RedBirds and the New York Bucks. This is a single elimination game in which both winners will advance to the Championship series starting on Saturday at 4pm.