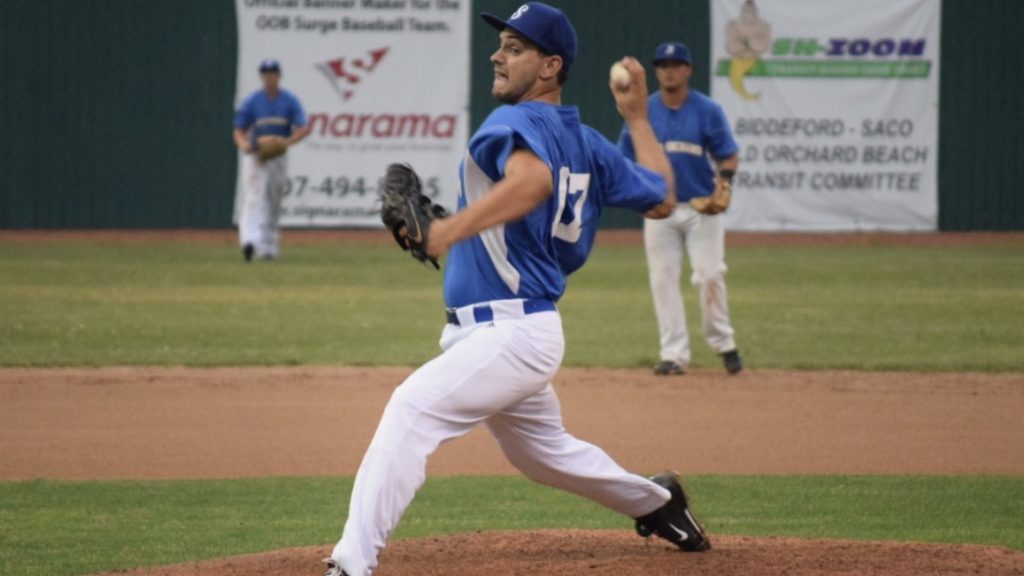 OLD ORCHARD BEACH, ME – The Sullivan Explorers took the field  a day after manager Jim Hayes was hospitalized and the Explorers played their hearts off although the team lost to the Surge after game was called due to rain

Eric Mozeika took the mound for the Surge against Sullivans Ricardo Espinoza. Mozeika got an early 3-0 lead to work with  as  Jordan Matos,  James Simpson and Edgar Lebron scored in the first 2 innings.

Espinoza would then settle down and and pitch 3 innings without allowing a base runner.  It was a rainy night in which it was tough to pitch in but Espinoza didn’t seem to be bothered by it as he only got stronger as the game went on.

In the top of the 5th inning, Robert McLam led off with a single and catcher Luis Touron belted a big fly off starter Eric Mozeika over the right center wall. The 2-Run home run was Touron’s first of the season and put the game 3-2.  With bases loaded and 2 outs and dangerous hitter Jesse Hughes up to bat, Brandon Fowler was caught trying to take home on a passed ball.  That would’ve tied the game with Jesse Hughes up to bat who singled to lead off the following inning.

In the top of the 6th the Explorers threatened with 2 outs as Mozeika exited and reliever Kevin Phelps came in to finish the inning in what would be the final of the game as the game was called due to weather.

The game, although only going 6 innings, was  considered a full game as the rules state that a game must go a minimum of 5 innings to be considered no longer postponed yet, final.

The Surge would take the victory and improve their record to  (4-2) while the Explorers fall to (1-5).

Tomorrows game is scheduled for 6:30pm