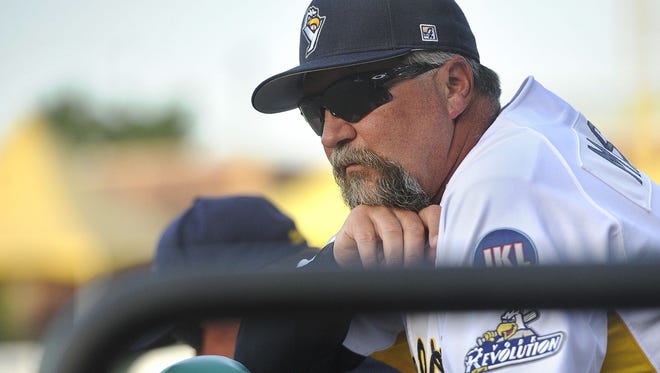 WASHINGTON, PA –   The Empire Baseball League welcomes York Revolution Manager of the Atlantic League Mark Mason to the Empire League family as a mentor and instructor for the 2020 Instructional Series. Mason will also be looking to sign players to complete 2020 Atlantic League rosters. He joins American Association coach Jonathan Albaladejo of the Landcaster Barnstormers as two elite coaches to be scouting and mentoring in the Empire League during 2020 camp and series.

Mark Mason enters his eighth season at the helm of the York Revolution in 2020. With 494 victories in addition to the 2017 Atlantic League championship, he is the winningest manager in Revolution history.
The longest-tenured manager in club history and tied for the longest-tenured active manager in the league, Mason also enters his 11th overall season on the staff in 2020, matching Enohel Polanco for longest-tenured staff member in club history. The two have been part of 715 combined victories.
Since Mason’s arrival in 2010, the Revs have had 29 players signed in-season by Major League organizations, 18 of whom have come from Mason’s pitching staffs.  Nine of those pitchers and 10 total players have made it to the Major Leagues. Lefty Justin Hampson (York ’10) worked a 1.80 ERA in 13 appearances for the New York Mets in 2012. Right-hander Shawn Hill, who began the 2012 season with the Revolution where he did not allow a run in 27.2 innings as a star, finished that season in the Toronto Blue Jays bullpen, earning a win with three scoreless innings against the New York Yankees in his lone appearance. Lefty Scott Rice (York ‘11) made the New York Mets Opening Day roster in 2013 for his Major League debut, and earned four wins in 73 appearances with a 3.71 ERA.  Four more were promoted to the big leagues in 2014 alone. Southpaw Ian Thomas (York ’12) made his Major League debut and the Atlanta Braves Opening Day roster. Righty Julio DePaula (York ’13, ’14) was called up by the Baltimore Orioles on July 7, just 11 days after his contract was purchased from the Revolution. Left-hander Ryan Feierabend (York ’12) earned a call-up by the Texas Rangers that same month. Corner infielder Andy Marte (York ’13) was called up by Arizona on July 31 and homered as a pinch-hitter in his first at-bat for the Diamondbacks that night. Lefty Edward Paredes (York ‘13-15) earned the win in his Major League debut for the Los Angeles Dodgers on July 24, 2017, and worked a 3.24 ERA in 10 appearances before going 2-0 in 2018. Lefty Ross Detwiler opened the 2018 season in York’s starting rotation and returned to the Majors with the Seattle Mariners that same season. In 2019, Detwiler went from Revs Opening Day starter to the Major Leagues with the Chicago White Sox in a span of about two months. The 2019 season also saw Feierabend return to the big leagues with Toronto and RHP Zac Grotz (York ’18) make his Major League debut with Seattle.
The Empire League welcomes Mark Mason and is excited for the mentorship and recruitment for the players of the Empire League.
Article by Empire Media