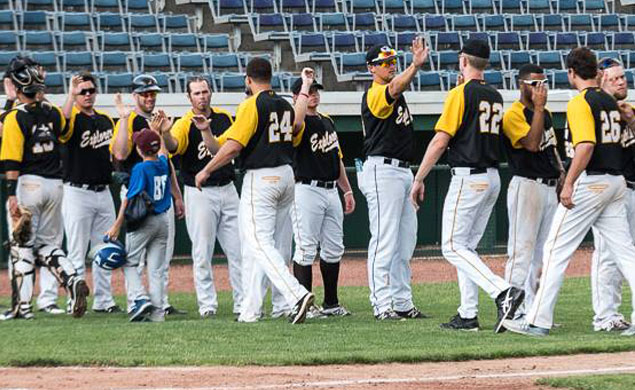 The Surge were defeated by the Sullivan Explorers with a final score of 8-5 tonight at The Ballpark.

Tomorrow’s game is a matinee game, starting at 1:00pm

The Surge cut the lead in half, scoring 1 off an RBI single from catcher Jordyn Van Atta.

Cody Frank took over the mound for the Surge in 5th, ending the night for Surge starter Jeremy Hall. The Explorers would take a 7-1 lead in the 5th, with DH Kevin Putkonen, Gonzalez, Hoover and Elijah Briseno each picking up RBIs.  The Surge picked up a run off an RBI single from first baseman Chris Allen.

The Surge offense came alive in the 6th.  Third baseman Luc Pomales started things off with a triple, reaching home on a sac fly from shortstop Dan Gagnon.  A 2-run single from outfielder Shaun Cooper made it 7-5 in favor of the Explorers.

Christian Telemaco took over the mound in the 7th, closing out the game for the Surge.  He ended the night with 2 Ks, 1 ER and 2 hits.

The Surge take on the Explorers for game 3 of their series tomorrow after at 1:00pm at The Ballpark.