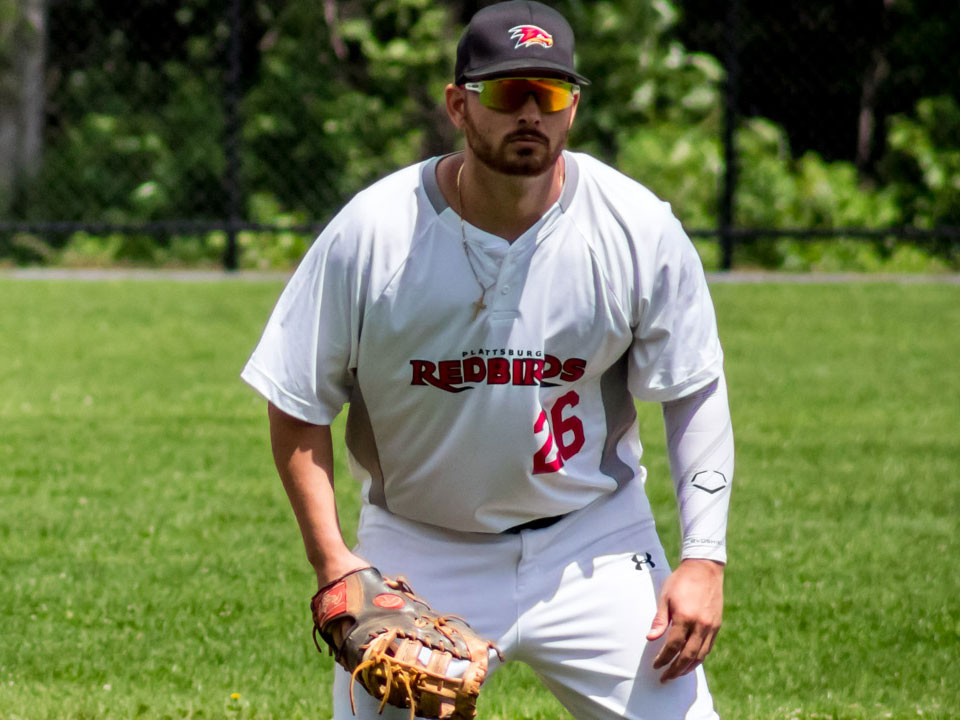 PLATTSBURGH, NY – After three days without baseball and a heroic effort from the Plattsburgh State Grounds Crew as well as Manager Joe Winkelsas, the Redbirds finally took the field again under a beautiful Sunday sky.
Dimitri Nuñez, who has one of the most intense “between-start routines” I have ever seen, was eager to take the ball in Game 1. He was brilliant thorough six innings – scattering 4 hits without surrendering a walk.
Islanders starter Fabian Feliciano matched Nuñez through three frames but the Redbirds finally broke through in the 4th on an error that scored Johnny Cole. The Redbirds extended their lead with a run in the 5th on a safety squeeze by Joseph Donaldson that scored Raul Shah but they could not capitalize on an opportunity to open up the game due to inefficient base running.
The mistakes would loom large as the game moved to the 7th and final inning. Nuñez–who had cruised through the first six–ran into trouble and gave up three consecutive hits to surrender the lead.
With the score now 2-2, Manager Joe Winkelsas went to his closer Harry Ferguson to stop the bleeding. Ferguson did just that with an impressive juggling act which rendered the Islanders offense harmless – keeping the score tied.
In the bottom of the 7th it looked like the combination of Feliciano and reliever Nick Kevlin would be able to wiggle around three walks to force extra innings. A two-out error changed that fortune and gave the dangerous Johnny Cole a chance to swing the bat with the bases loaded.
Cole made the Islanders pay. He roped a single up the middle which easily scored Kenny Collins and secured the Redbirds’ fifth consecutive victory.
In Game two, offense was the theme in this game. Redbirds’ starter Matti Doxter faced seven batters before recording an out in the game. We all know how difficult it is to win both games of a doubleheader and many sensed that this game could be the one to snap the Redbirds’ win streak.
Although his back was against the ropes early Doxter would fight back. He closed the first frame with back-to-back strikeouts followed by a fly ball to center which limited the damage to only three runs. This was a huge victory for Doxter because it wasn’t long before the Redbirds would answer by scoring six runs in a second inning, highlighted by a smoked line-drive single by Dalvin Ramon that scored Ronald Jackson and Damon DeJesus.
Doxter settled in after the rocky first and retired eleven batters in a row as he cruised into the 6th where he finally gave up back-to-back singles followed by a two-run infield throwing error which would knock him out of the game. Nathaniel Leon inherited a 7-5 lead with a baserunner on second and no one out. Although he would surrender a run, Leon was able to tip toe around trouble and escape the 6th with a 7-6 Redbirds lead.
In the home half of the 6th the Redbirds would score an insurance run. Ronald Jackson sparked the inning who walked to lead off the inning, stole second base, and scored on a single by Damon DeJesus.
We would see Harry Ferguson again in the 7th and he was equally impressive. He pitched around a ringing double into the right field gap to secure another clean frame and another Redbirds victory.
Ferguson notched both a win and a save on the day as he aided the Redbirds in capturing their fifth and sixth consecutive wins.
The Redbirds close the series with the Islanders tomorrow, July 3rd, at 12PM ET.
Article by Michael Chiaradio  – Ahead of the Spread