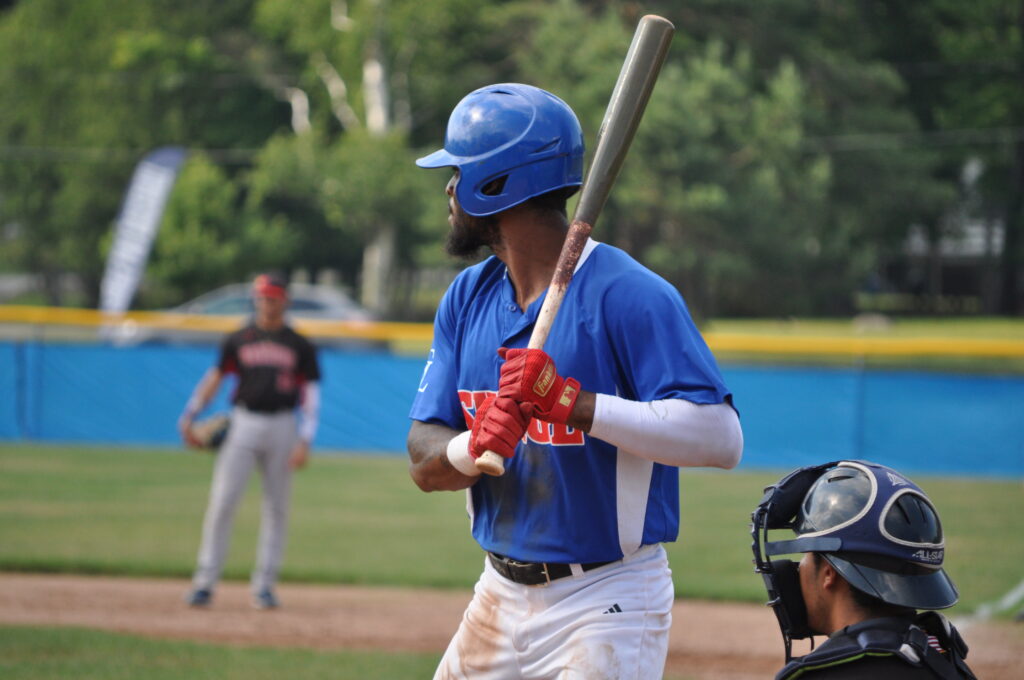 On Saturday, July 3rd, The New Hampshire Wild traveled to Saranac Lake to take on the Surge in a three-game series.

The Surge were on their A-game, as they took all three games in the series. After winning their last series against the Tupper Lake River Pigs, this moves the Surge into competitive playoff positioning.

Saranac Lake opened their first game with an 11-10 walk-off win. In a game where there were 26 total hits, the Surge got off to a hot start, leading 9-5 after the first four innings of play. The Wild eventually evened things up, scoring 5 runs over the 6th, 7th, and 8th innings.

The Surge looked to end the game as the two teams remained tied 10-10 heading into the bottom of the 9th inning. After the Surge the secured some baserunners, Kenny Hernandez roped a double to end the game in walk-off fashion.

Ryan Dickt was the leader at the plate for the Surge who had three hits and smoked two doubles. Aj Wright, Juan Pena, and TJ Riles also each chipped in two hits each for the Surge. Closer, Corey Steward secured the win on the mound for Saranac Lake.

Javon Martin led the Wild with three hits as he went 3-3 in the loss. Sean Guida, Jacquez Williams, and John Lantigua all chipped in two hits for the Wild in the performance.

Game two of the series was nothing like the explosive hitting performance of game one. In a game where there were only seven total hits, this was a day where the pitchers on both teams got to shine.

The score remained tied at zero going into the bottom of the seventh inning until Brandon Gutzler scored the only run of the game. That would be all the run support the Surge needed as they took the second game of the series in a 1-0 victory.

Matt Valin put together a strong start for the Surge striking out ten batters over six innings pitched. Reliever, Kyung Min Han received the win on the mound, while throwing two hitless innings. Corey Steward collected the save and secured the shutout.

Wild starting pitcher, Sungmin Choi threw a complete game while only allowing three hits in the loss. His one run given up was unearned. New Hampshire third basemen, Jon Lantigua led all hitters with two hits.

Going into game three of the series the Surge looked to sweep the second-place Wild, and they did just that.

The Surge got out to a hot start in the first two innings, scoring three runs over that span. That turned out to be all they needed, as they collected a 6-1 win.

Corey Alexander II was hot at the plate, smacking a game high three hits. Alexander scored each time he reached base. The Surge used the momentum from their strong pitching performance of game two, as Shawn McFeggan tossed a complete game win on the mound.

John Lantigua led the Wild in hits with two as he continued his dominant series at the plate.

The Surge look to remain hot in their next series against the Plattsburgh Thunderbirds after winning 5 out of their 6 last games. The Wild look to bounce back as they travel to Tupper Lake to take on the first place Riverpigs.