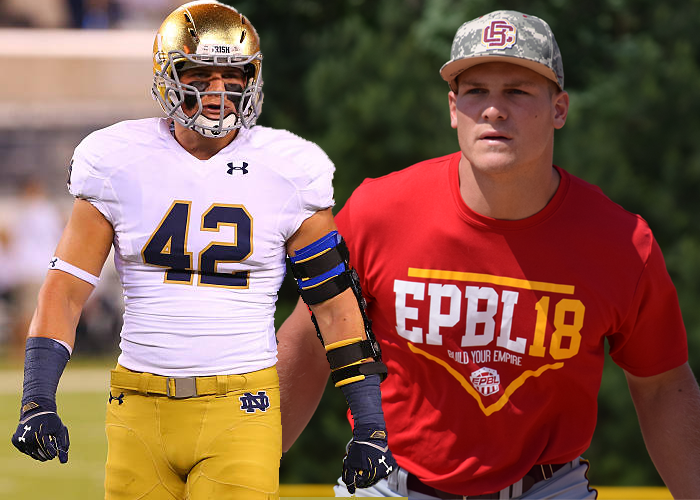 Deeb, from Plantation, Florida, was a First-team linebacker on Fort Lauderdale Sun- Sentinel Class 5A-4A 3A-2A squad for 2012, first-team linebacker on Miami Herald All- Broward County 5A-Indiana all-star squad, standout at linebacker for American Heritage School in Plantation, Florida, ranked 34th player nationally on Rivals.com list of inside linebackers, ranked 25th among middle linebackers on Scout 300 by Scout.com, made 95 tackles, four sacks and an interception as senior in 2012, ranked fifth among all Broward County prospects coming into 2012 by Miami Herald, made 90 tackles, two sacks, three interceptions and forced five fumbles as a junior in 2011.

He played in two games for the Irish (at USC on Nov. 29 and vs. No. 22 LSU on Dec. 30) in which the Irish won both games. The 6’2″ 255lbs Outfielder Prospect is looking for an opportunity to play professional baseball for the first time in his young career.

“I had the opportunity to speak with him today and he’s just a very educated, strong, energetic and talented individual. He’s got an incredible attitude, mindset and work ethic. We will see what coach Young decides to do on Friday.” VP Jerry Gonzalez

The Empire League rosters will be released on Friday and prospects all around the league like Deeb are all hoping for an opportunity in the Empire League.